I only discovered this book recently but it contains some interesting insights into group decision making, providing a range of evidence to support — often counterintuitive — observations about the best conditions for knowledge creation. As such, it relates well to Alvin Goldman’s “veritistic selection practices” — social design aimed at maximising the truth value of aggregated opinion.

Produced at a time when prediction markets, blogs and wikis were attracting growing interest, it is the book’s analysis of the more traditional social collaborative processes that stood out for me.

A central idea early in the book is the Condorcet Jury Theorem, which states that — on binary and numerical judgements at least — a group is more likely to be correct than an individual under the conditions that:-

Notably, only some of the group need to know the correct answer, as the rest will answer randomly preserving the effect. This is redolent of Millionaire’s “Ask the Audience” option, which another book The Wisdom of Crowds claimed is correct 91% of the time, more often than the phone a friend option. Some warn against calling this mathematical effect “wisdom”, however. 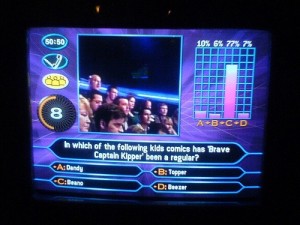 Sunstein goes on to provide a range of evidence supporting the observation that deliberation does not lead necessarily lead to more accurate outcomes than polled, statistical samples. This may be due to:-

What this all mean for knowledge creation on the social web? Perhaps that giving scores and weighting to reputation, while establishing authority and expertise, may also dissuade or detract from informed dissent, and that such dissent may also warrant recognition.

In another review of the book, Ethan Zuckerman noted:-

“A large number of the most interesting projects taking place on the internet use strategies to aggregate information from multiple users to create new knowledge …. analyzing these systems in terms of their effectiveness in getting people to reveal hidden knowledge is, in my opinion, an excellent framework for evaluation.”