There are a range of approaches for visualising non-spatial data over time. For me, to be effective and useful the method needs to:-

The following post seeks to summarise some good techniques using a few key publications and examples.

These approaches work for data that can be aggregated so that the overall size of the graph is meaningful.

Lee Byron’s Stream Graph uses Last FM Audioscrobbler data to illustrate a user’s listening habits over time. According to the authors, the visualisation method was popular with users who were able to associate their listening habits with life events and time of year. Data is extracted in the form of number of plays per month, per artist. The visualisation approach is similar to ThemeRiver – a smoothed, stacked graph centered on the origin and expanding either side – but adds some further algorithmic smoothing. It also selects an ordering which places the early onset series toward the centre and subsequent onsets at the top and bottom. The software is available via the above link and uses Java/Processing. There is also a javascript implementation in the d3.js library IBM History Flow was used to create compelling images of editing patterns to Wikipedia pages and illustrates the number of users involved in addition to the page length (so the more radical revisions are visible as large “steps” – edit wars become zigzags.). The researchers used the Wikipedia revision history and token matching to detect changes between versions. The program was written in Java but is not available for direct download. 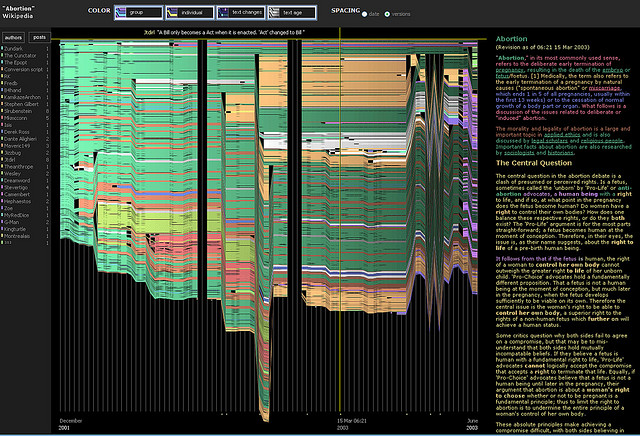 Here, the axis is arranged spirally and scaled according to periodicity in the data. If not known in advance, periodicity may be detected by either animating through different cycle lengths (see a good example at EagerEyes) or by computing a spectrum using Fourier transform (for regularly spaced data) or least squares fitting of sine and cosine functions. The spiral shape and the distance between plotted points are fairly easy to calculate. The example on the left shows daily sunshine intensity, with cloudiness between days easily comparable. The formulae to compute the spiral and scale the plotting are available in the paper below by Weber et al. Some code to create a spiral plot in R using ggplot2 is avaiable. 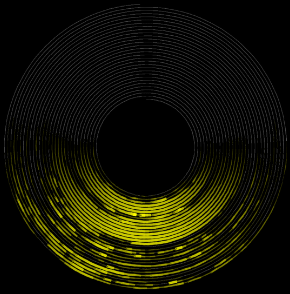 Here, daily average values or cluster groups are colour coded and displayed in a calendar. The example below is from the d3 javascript site and displays Dow Jones averages from Yahoo Finance.

This type of visualisation has a long history. A stemma codicum is used by philologists (text scholars) to track versions of a manuscript, based on modifications that can be tracked over time from an original version. This example tracks versions of Dante’s Divine Comedy between 1321 and 1355

A modern equivalent is the visualisation of source code repositories, such as the network viewer on GitHub. The following shows some recent activity on Node.js repositories. Users are shown down the left, with the timeline along the top. Each node is a “commit” to the repository. Connections between repositories via forking and merging changes are shown, along with major releases: 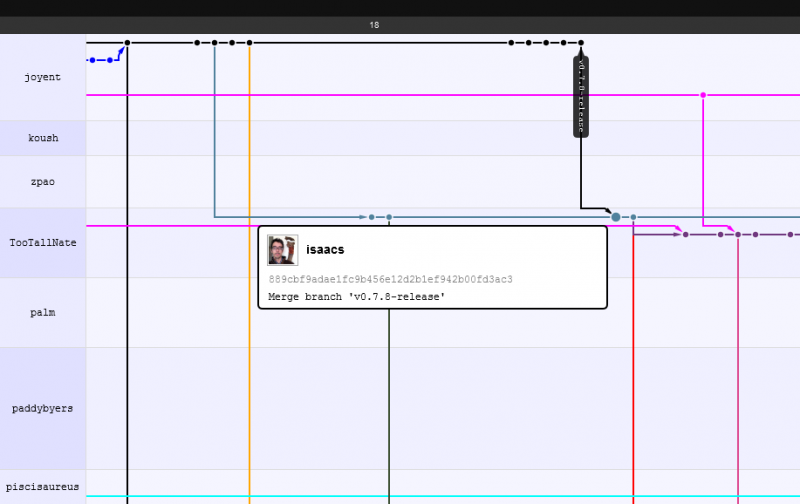