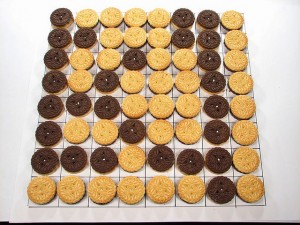 Modelling helps us to really think through theories and understand their ramifications. The process supports clearer thinking, the ironing out of logical inconsistencies and the comparison of alternatives. That said, modelling is not without its shortcomings. What we choose to include or exclude from our model and the assumptions we make will greatly determine the outcome we get. But if we bear these in mind, models have the enormous benefit of helping us to quickly simulate and assess the possible outcomes of policies, practices and social architectures1.

In philosophy, modelling is less widely practiced than intuition, thought experiment and the logical formalisation of philosophical concepts. That said, some philosophers have started to realise the power of agent-based modelling for the comparison and contrasting of theoretical positions. Modelling has the advantage of being able to highlight interactions and emergent properties in complex systems, where feedback loops or perverse incentives might derail a model that at first sight seemed equitable or ethical. For epistemology, and especially social epistemology, modelling can help to provide insight into how rational agents use and communicate testimony and how conditions for knowledge exchange itself can vary or be manipulated.

As I take a holistic view of epistemology to include epistemic or doxastic systems, I also will cover here models that less directly related to knowledge but which I feel have pertinence, particularly when related to knowledge exchange in online communities. I will therefore start with a treatment of norms in their widest sense before focusing in more on epistemic norms.

A norm can be defined as follows :

A norm .. means fulfilling a generalized expectation of behaviour. When members of a society violate the societal norms, they may be punished – Habermas, quoted in Savarithamu et al (2009)

They are typified the idea of a communitarian contract that may be at odds with individual interests:

Norms are conceived and spoken of as imposing obligations when the general demand for conformity is insistent and the social pressure brought to bear upon those who deviate or threaten to deviate is great. Norms.. are believed to be necessary to the maintenance of social life of some highly prized feature of it.. the conduct required may.. conflict with what the person who owes the duty may wish to do – Ullmann-Margalit (1977)

Evolution of Norms in General

As Axelrod notes, norm definitions themselves are often not tested or properly elaborated, meaning that our understanding of how norms are formed or change can be quite poor. Axelrod’s landmark paper sought to investigate norm formation through the design of a model inspired by game theory and evolution and predicated on the power of punishment to help establish and uphold norms. The two main parameters in the model were boldness and vengefulness and the two main actions available to agents were to “defect” (this could apply to anything norm-related such as littering or smoking in a public place) and to “punish” those observed defecting. The likelihood of defection was determined in part by an agent’s boldness, and the likelihood of exacting punishment was determined by an observing agent’s vengefulness. Points were awarded for successfully defecting, but more were taken off if the defection was observed and punished.

The outcome of Axelrod’s initial model is that defection behaviour mostly falls to 0, as the vengefulness punishment was considerable. But in other cases as vengefulness lowered, then the benefits of defection became overwhelmingly strong, leading all the agents to defect repeatedly. The model thus had two stable states, respectively representing a successful norm being established and the complete failure of the norm.

I have created a version of this model using Netlogo, available on the modelling commons. In Axelrod’s paper, the undesirable outcome happened on 2/5 runs of the model, though in mine it only seemed to happen occasionally (seeming to depend on the right mutations happening at the right time) . This must be largely due to implementation differences or a bug in mine! Interestingly, the model tends to stabilise on low or 0 boldness and only medium vengefullness – so only occasional punishment is needed to establish the norm. 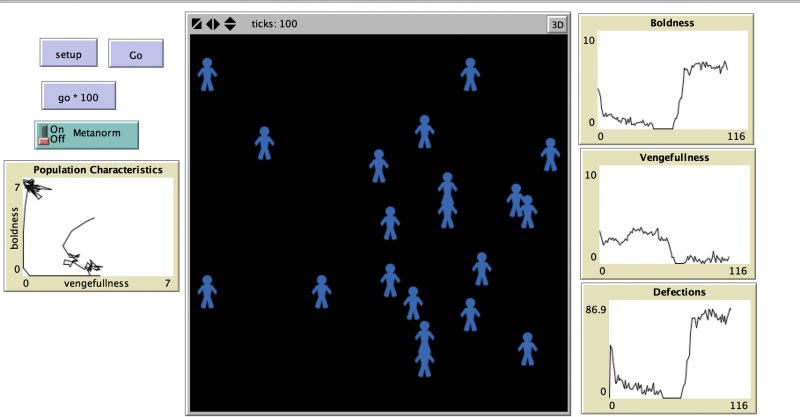 In rare cases, defections initially drop away, but then suddely soar along with boldness : Community becomes over-lenient?

For Axelrod, the risk of the norm overturning clearly indicated that other factors must be at play in the establishment of norms. He introduced the possibility of “metanorms” which is the norm of enforcing the norm itself. If agents observed a defection but chose not to punish it, then they themselves were punished. Axelrod showed that use of the metonorm leads to more rapid stabilisation on a more “vengeful” community. 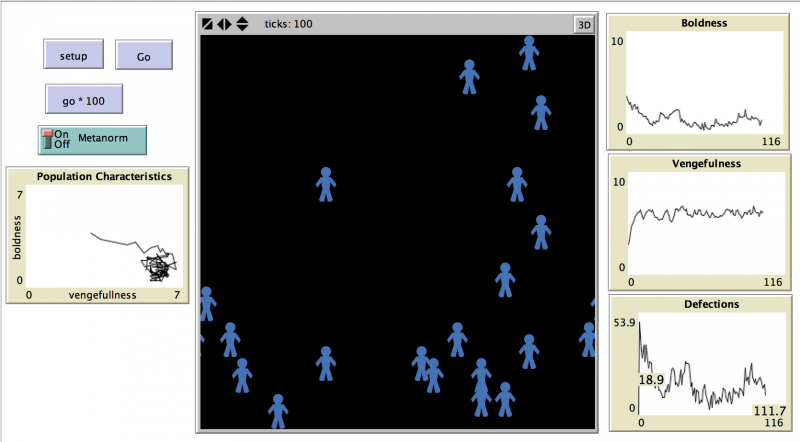 With “metanorms”, agents are punished if they see defections but do nothing about it. This also leads to the development of a largely norm-observing (yet more vengeful!) community

Axelrod completed his paper by noting that a range of other (not modelled) factors must contribute to norm formation: notably power, social proof and reputation. The direct observation of others’ behaviour or the direct intervention of powerful or authoritative figures in norm enforcement or embodiment is something that can be demonstrated from various examples in human social and political behaviour.

It is interesting, and significant, that Axelrod focused on the negative reinforcement of punishment in his study of norms. For me, this seems to take the focus away from what might be the more important constituents of a community – namely the exogenous and endogenous goods that often comes from observing a norm. It is perhaps telling that Axlrod’s real-world examples of the metanorm are cases such as the persecution of African-Americans in 19th Century America.

When we consider social knowledge, punishments do exist and might include: the exclusion of individuals from social circles or the community as a whole, the downplaying or outright exclusion of testimony or the otherwise sidelining of unpopular belief. But alongside these is a plethora of more positive social and individual reinforcements: sense of community, self -efficacy, scientific and social progress to name but a few.

Perhaps the most important norms in social epistemology concern testimony, the transmission of knowledge through communication between individuals. Here, there are at least two views. One, termed non-reductionism, or the principle of credulity, holds that humans are predisposed to accept testimony as a primary source of knowledge and that this has survival value. A default assumption is that the speaker is not trying to deceive or mislead us. An alternative position is reductionist, holding that testimony is only acceptable as knowledge if the hearer is able to reason, compare, or observe corroborating information. Perhaps more on the reductionist side, but also in line with the intermediate position of “epistemic vigilance”, some epistemologists see a necessary accompaniement of the acceptance of testimony being and assessment of the character and credentials of the speaker.

So our candidate testimonial norms (TNs) can be defined as:

The rule “believe others in the absence of conflicting information” is one TN, and “only believe those you know to be reliable” is another. – Mayo-Wilson, 2014

They are competing because:

Those who accept testimony more readily will believe more with higher risk of error, while those who do not run the risk of knowing less – Zollman, 2014

Zollman’s work is similar to that reported by Mayo-Wilson (2013) on testimony in scientific communities. Here, a network-based model can simulate the dissemination of new discoveries. Mayo-Wilson notes that in practice, all testimonial norms tend to converge in the same way and comparitively quickly in comparison to the discovery time, or the actual scientific work that leads to the new knowledge. However, when misinformation is introduced, then the reductionist position is less prone to error given changes in the communicative structure of the network (towards scientific insularity). This is because the more credulous agents suffer by being further removed from the sites of knowledge production and error is compounded. 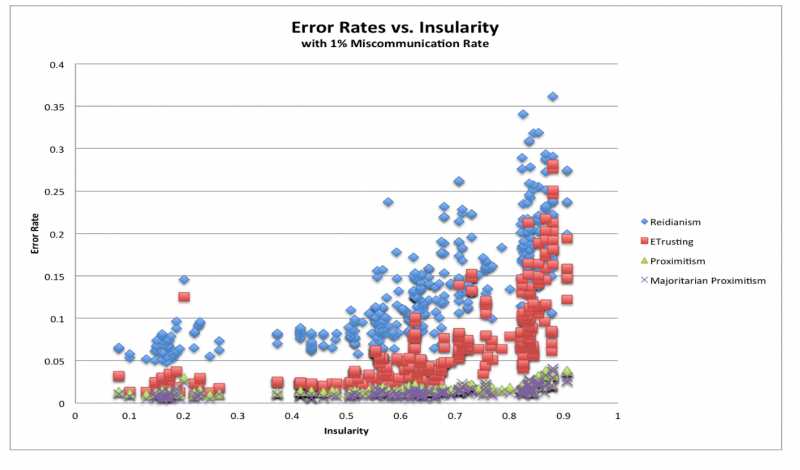 So both Zollman and Mayo-Wilson have shown that modelling testimony from a network angle can shed light on how knowledge can diffuse most readily, and that these models point to credulous positions being as good or even at times more efficient and egalitarian, given the right network structure.

Between Axelrod’s generalised approach to norms and Zollman and Mayo-Wilson’s more specialised, epistemological context lies fertile ground for the investigation of social knowledge from a holistic, naturalised outlook. When considering online communities, the especially exciting prospect is the comparison / reification of model predictions with actual observed behaviour. This is how we might come to understand more about what makes for successful, thriving communities and how others might be tweaked, or even fixed, through the application of policies and practices suggested by a model.